10 facts about the Samsung Galaxy Note 9

Two weeks with the flagship from Samsung: impressions and conclusions. The more I read my impressions of the new Samsung phablet online, the more I recalled my experience with SGN4 and a brief acquaintance with SGN7, the more interesting it was for me to use the new product. And then wonderful people said that it was my turn, and a few days later the smartphone came to me for a test. This article contains personal (read, subjective) conclusions about the Note 9 after a short use as the main device.

The evolution of the Note line has always stuck with business users and those used to squeezing everything out of a smartphone in terms of use cases. I personally have always perceived the phablets from Samsung as the most versatile 'combines', in which top-end 'hardware' is combined with a cool visual component. As I wrote in 'An alternative look at the Samsung Galaxy Note 8', after the Note 4, there has been a trend towards design convergence with the Galaxy S devices in the lineup. This can be treated differently, but the fact remains. Thus, for the model under index 9, we received a single design language for all three flagship models with some differences.

Seen from the side, the Note 9 and SGS9 / 9 + distinguish between the rear cameras and partly the geometry of the body, in the S line the frames are more rounded, due to this, the width of the S9 + is perceived completely differently. I can't call myself a fan of the rounded display aesthetics, perhaps that's why I was so fascinated at first glance by the Note 9, or rather, its width (oh yeah). I just can't get used to narrow smartphones, no matter how hard the manufacturers try. And if in my OP5 the case is firmly 'rests' in the palm, then the rounded bezels in the Note 9 give a completely different perception. Feels like this solution makes using the device more convenient and pleasant. It seems to be a trifle, but it attracts attention. I had concerns that I would have 'a lot' of 6.4 inches. In fact, there were no problems with this, perhaps, except for the size of my hand: I needed to intercept in order to use the elements at the top of the display. The brightness seemed to me excessive, every now and then I reduced it. But this is probably because I rarely used my smartphone on the street, mainly in rooms with dim lighting. 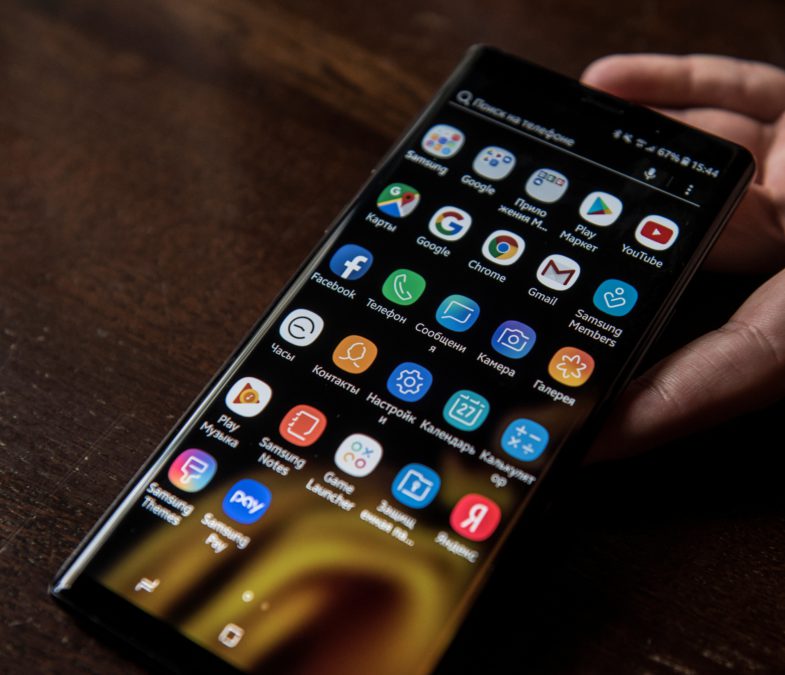 Swipes on the left / right cause aesthetic delight and, in a sense, addictive, after returning to my device I felt the difference. Premium, stop what you do! All jokes, but the display in the 'nine' instantly captivates, it is the best that I have seen recently, if not for one software 'but', which you probably already guessed about and which we will talk about a little later.

I visited the device in the black version. To the delight of minimalists, the front panel lacks any controls and logos. Geeks, in turn, are melancholy swiping their fingers across the display, thinking how cool a fingerprint sensor would fit in here. But not this time, we are waiting for the next generation. The glossy black body looks and feels just gorgeous, the feeling lasts exactly until the moment the smartphone first tries to make friends with the asphalt / floor. Gorilla Glass saves: there was one rather dangerous episode with a fall, which was absolutely painless for the body and screen. But I got ready and on the very first day, as usual, I placed a vinyl sticker from XtremeSkins on the back of my smartphone. The British, of course, still need to catch up to the level of more eminent North American competitors, especially in terms of the uniform thickness of stickers with different textures, but otherwise everything is clear and accurate, there are no gaps and highlights.

The height of the Note 9 is such that the edge of the phone often peeks out of the pockets of your trousers / jeans. However, it does not interfere with walking, but it makes you think that it is time for clothing manufacturers to rethink the size of pockets for modern realities.

A short-term return to the OS from Samsung that changed its name cannot be called something joyful and pleasant. Yes, everything is in place, but a lot of unnecessary things. Still, I prefer to choose applications myself, rather than hoarding duplicate applications on the device. On the other hand, no one bothers to hide or stop them, the place allows, but in its 'software' Samsung continues to dictate its conditions and scenarios. The position has a right to exist, but not everyone will appreciate it.

Having already used iPhone X style gesture navigation on several devices, I expected a similar opportunity from Samsung Experience. Sorry, but again, I don't like the onscreen navigation keys. But after using gestures, these buttons are even more perceived as archaism. Nobody argues, in Note 9 they hide where it is not needed, but I would like to completely abandon these elements. Apparently, in this aspect, Samsung chooses its own path and does not want to give up its beliefs and thus distances itself from copying Apple. 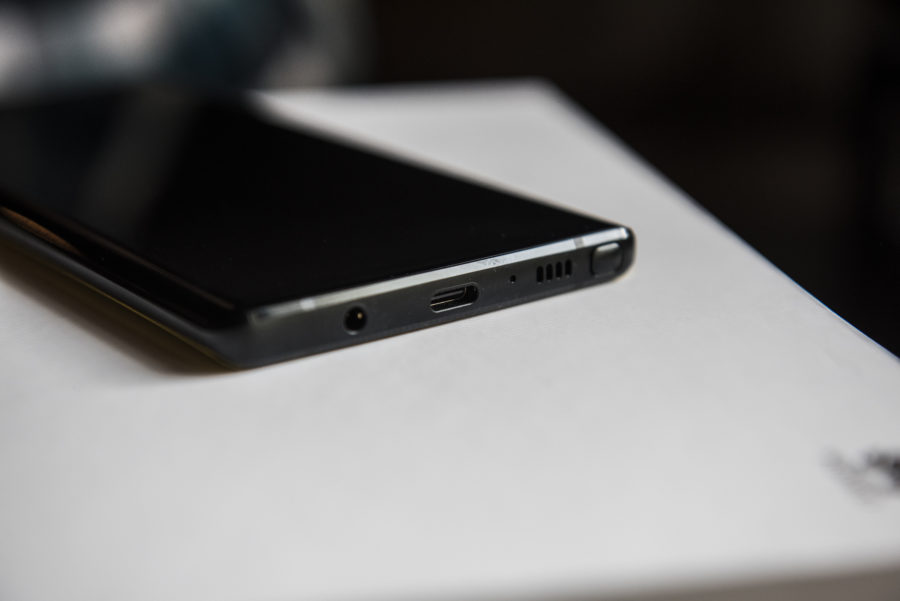 As for the updated S-Pen, I liked the implementation of the stylus slot in the body, there is no longer any chance that the stylus will accidentally catch on something and fly out of the body, as I sometimes did with the Note 4. Now, to take out the S-Pen, you need an accented pressing on it until it clicks, similar to how a pen clicks. The software 'tricks' are interesting, but I want to see more application scenarios.

I decided to highlight this point separately for the reason that the Note 9 is among the 'best devices for watching YouTube' (YouTube Signature Device). And the first time you open the YouTube app, it prompts you to turn on User Experience Enhancement Mode. In it, when you go to the application, the backlight is automatically increased and the mode is turned on to provide the best video quality. In fact, watching YouTube on such a display is a pleasure. But in the process of using the application, it turned out that it does not display the option for playback with 60 fps, for example, 1080p60, for individual videos. The same videos on SGN9 and OP5 had identical playback options, except for the notorious 60 fps, which were only present on OP5. Moreover, a similar feature was traced in the full version of YouTube in the Chrome browser on SGN9, there were versions with 60 fps up to 8K.

After discussing the discovered feature with Eldar, we came to the conclusion that a special algorithm works here, the logic of which I personally could not understand. Of course, the smartphone can be forgiven a lot for the Rich HDR mode in YouTube, but the moment remained incomprehensible to me, maybe some of our readers are aware of this situation.

No matter how much they sinned to unlock the face and iris, it is worth admitting that in both cases it happens with lightning speed. There is simply nothing to complain about. In the case of insufficient lighting, there were no problems either; in this regard, the device was very pleased. Frankly, I'm not a fan of face unlocking, I use a fingerprint sensor, but I can't help but note the high-quality implementation.

As for the fingerprint scanner, its location eliminates the click on the camera, which some users of the previous generation of Galaxy devices complained about. It works very quickly, it seems that literally a fleeting gesture is enough and the smartphone is already unlocked. The only thing that I would change in it is the size, I would make it a little larger for a confident hit with my finger.

On the first day I changed the resolution from FHD + to QHD +, I wanted to see how the smartphone would behave in terms of autonomy. To the Note 9's credit, in all my usual scenarios, it stays stable for about an hour longer than a smartphone with a regular FHD display. That is, after 'pumping' the battery, the results will be about the same, but no one bothers to switch back to FHD + and thereby add operating time without the need to connect to an outlet. Pass, Samsung.

For all its merits and charms, the Note 9 is perceived by me as a somewhat overrated smartphone. Yes, rate jumps, yes, competition with Apple, but 70 (and even more so 90) thousand for me is a lot, even for such a top-end smartphone, especially in the context of the growing large Chinese manufacturers who are ready to compete for our wallets. On the other hand, there are not many competing devices on the market yet that can offer the same specifications. There will be buyers in any case, I have already talked with the happy owners, none of them regrets the purchase, and I understand them perfectly. Without a doubt – yes, despite all my subjective complaints, I think the Note 9 is the best 'phablet' on the market right now. Many are stepping on the heels, a number of promising announcements are ahead, but in terms of the totality of characteristics, the smartphone is still out of competition. The line has something to strive for and where to develop, the question is how they see this class in Samsung and whether the Note will be combined with the S series.

The Note 9 went home safely. However, after returning to my permanent apparatus, I did not experience any dissonance, except that I was used to rounded frames. Undoubtedly, Samsung has turned out an interesting device, it will be interesting to watch the evolution.