Winter snowdrifts are gradually turning into a heavy mass, scorched by the sun and flowing under the feet of pedestrians, and we continue to stir up the archives of MWC 2018, because the public did not know about all the iconic new products of the beginning of the year. As any experienced computer user knows that the overall performance of their device depends on many factors. This also applies to smartphones based on Android. And if an ordinary person cannot independently replace the chipset and RAM of a smartphone, then replacing software and storage for third-party applications (microSD memory cards) is a real way to refresh the well-deserved old man. Our impressions of the performance of a smartphone largely depend on the pauses during which we wait for the application to load into RAM. And if in the case of a small application only a few megabytes in size there are no long pauses, then in the case of a full-fledged game “weighing” several gigabytes you often have to wait almost a minute. And the most logical way to eliminate this offensive injustice is to install the fastest memory card on the market and transfer all applications to it.

Separately, I would like to note the marketing of manufacturing companies – how easy it is for them to hang the labels 'shockproof and waterproof' on devices in which there are no mechanical moving parts (even fastening screws), technological holes and electronic 'filling' of which with the help of a polymer resin turns into a single whole with body. Rest assured, if the marketing terms 'resistance to loud noises, pregnancy and the evil eye' existed, they would not have forgotten to mention them. And, of course, all manufacturers indicate full support for playing 4K video from their memory cards. As if it were a separate parameter that has nothing to do with the read speed of the storage device.

Birches are read by a wide variety of people, among them there are those who measure the capacity of memory cards not by gigabytes, but by the number of photos, minutes of video and the number of songs. Especially for them, I give the average data for a 256 GB memory card:

We are talking about a new memory card that is faster than most of the internal storage of mid-range smartphones and former flagships – the SanDisk Extreme UHS-I with a capacity of 400 GB, presented at MWC 2018. There are already cards with this name and a smaller volume (up to 128 GB) on the market , and in some models the read speed is 275 MB / s, but for the first time passed the psychological mark of 400 GB of capacity while meeting the UHS-I standards in a small microSD format. Let's take a look at the results:

Read / write speeds are 160 and 90 MB / s, respectively. The card will function properly at operating temperatures from -25ºC to 85ºC and will store data at temperatures from -40ºC to 85ºC, and its housing is shock and X-ray resistant. The card is fully compliant with Application Performance Class 2 (A2), which requires a minimum read speed of 4000 IOPS and a minimum random write speed of 2000 IOPS. What else can you say? It is faster than the hard drive in the computer on which this material was written. The card will be available soon, and the package will include the RescuePRO Deluxe software for recovering accidentally deleted files.

The memory card we have considered is intended for use in existing equipment – smartphones and various cameras, but Western Digital has something to surprise the public with. Surprise for real. How do you write speed to the memory card 880 MB / sec? Do you think it's impossible? For this, only one condition is necessary – that the chipset manufacturers adopt the PCIe x1 PHY removable media interface, which Western Digital is actively promoting. Such a WD memory card was demonstrated at MWC 2018. Due to technical circumstances (WD does not produce smartphones), the demonstration took place on the open motherboard of a conventional computer, where the memory card of the future was connected via an M.2-to-SD adapter: 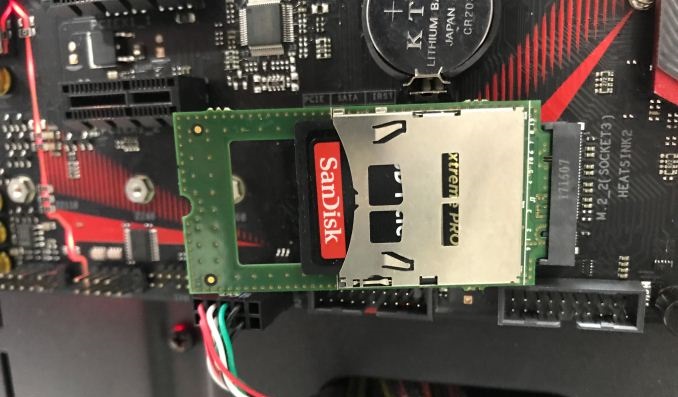 The company does not disclose the type of memory or controller that goes into the SD PCIe card, but states that the cost of implementing the PCIe interface in the memory card is low, the size of the PCIe x1 PHY strapping is quite small and uses the existing UHS-II / III outputs.

Toshiba lags behind but doesn't give up

At MWC 2018, Toshiba Corporation unveiled a new family of microSDXC ™ UHS-I M303 memory cards. The 'older' memory card has a capacity of 256 GB and boasts read / write speeds of 98/65 MB / sec. Quite a good result for the beginning of 2018, although it does not come close to the speeds of internal storage. Apparently, the pace of development of new technologies in the company was influenced by financial difficulties and organizational changes in the past year.

The M303 family will be available in 64GB, 128GB and 256GB storage capacities. Guaranteed to work in a temperature range of -25 ° C to + 85 ° C, memory cards are X-ray resistant, shockproof and waterproof. Toshiba offers a 5-year limited warranty on all M303 cards (except for mechanical damage). M303 memory cards will appear in stores at the end of the first quarter of 2018.

Apacer – nothing to be happy about

As in the case of Toshiba, it does not offer any significant changes.

The best samples of memory cards from a well-known brand are at an average level and do not boggle the imagination (75/65 MB / sec).

Samsung – where's the card, Billy? We need a map! Alas, there is no information about new Samsung memory cards on the net.

2017 models of the EVO and PRO series no longer surprise with their read and write speeds of 100/90 MB / s, although they remain worthy of attention, especially if the price for them drops to reasonable.

The Taiwanese giant's database has information about a reactive series of memory cards with absolutely record performance – ADATA Premier ONE microSDXC UHS-II. If you read the text carefully, you will notice that the new ADATA cards support the higher data transfer standard UHS-II versus UHS-I from most other manufacturers. In real life, this means that external memory cards are equal to or surpass the read / write speed of internal drives Android – the flagships of last year. ADATA is happy to award itself medals for the first place on its own website:

And she has every right to do so. Of all the existing memory cards that will be on sale in the very near future, only ADATA Premier shows a microSD memory card with a read speed of 275 MB / s with a volume of 256 GB. How much they will cost and how reliable they will be is a separate question. But it cannot be denied that memory cards of this series show speeds only half that of a good modern SSD drive for a computer. And if the smartphone supports work with UHS-II memory cards (full backward compatibility with UHS-I), then expanding its storage with such a memory card will lead to the most positive results. The ADATA Premier ONE microSDXC UHS-II line will feature memory cards of 64, 128 and 256 GB, and the warranty will apply to the entire service life (except in cases of mechanical damage). The price will certainly boggle your imagination too.

According to the results of the last update, the game Shadow Fight 3 occupies an obscene 898 MB in the smartphone's storage, and you have to wait about 20-30 seconds for its launch. Is it worth buying a new smartphone for one favorite game? Probably not. And a new memory card? What do you think?