Is it possible to buy a normal secure smartphone for less than 10,000 rubles?

Some phones are very thin, others are plump, but the fattest are shockproof smartphones. Dozens of grams of excess rubber weight hang from their sides, which encircle the body like life buoy rings. However, this does not spoil their appearance at all, no one will wear fitted jeans on a smartphone. Or will it be? For many years, developers have been trying to convince us that only a massive plastic case will save a smartphone from destruction after a fall. But is it? Or maybe there is something else?

The concept of reactive armor is very simple on paper, but difficult to manufacture. It consists in creating two or three contours, external and internal, between which there is an elastic compensating material. In expensive and well-protected smartphones (CAT, Runbo, older ones AGM and Torex), the heart of the design is an aluminum frame, quite thick and massive. On the one hand, such a frame supports the screen, preventing it from bending inward, and on the other hand, it is a tray-tray for careful storage of the motherboard. It should be noted that in cheap shockproof smartphones, such a frame can take up only half of the available area, which looks like a pitiless economy.

Upon impact, the load is evenly distributed among all components and damped, while none of the circuits receives 100% of the dynamic impact energy. All OUKITEL WP2 electronics are protected by an aluminum pallet frame.

An important point – all internal cables in a good rugged smartphone have a certain power reserve, specifically to compensate for the impact on materials of extreme temperatures.

In this section, let's talk about the electronic guts of the smartphone. Even in inexpensive rugged phones, the right moments are found – a thick PCB motherboard and a 'blind' waterproof 3.5 mm jack. But there are some little things that make it clear about the work that the designers of the smartphone put into their creation. One of these little things is to strengthen the battery with a metal bracket. Usually, the battery is simply glued to the frame, and the back cover tightly holds the outside of it. This is enough for a simple phone that is not designed to be dropped, but in a rugged phone it would be nice to introduce an additional bracket everywhere. In a good smartphone, there are no unprotected electrical elements on the motherboard, as a rule, they are completely or partially covered by covers. Based on this, the BlackView BV6000 is not such a smartphone, which is clearly visible in the picture below (photo of the vicrec channel, YouTube). Alas, in budget off-road smartphones, the usual filling is used, the same thin motherboard is in a cheap smartphone and a slightly more expensive “protected” one, and all external connectors are covered with massive plastic caps. There is no need to prove the fact that any plug will fall off over time, and in this case, if the model is not too massive, then it will not work to buy a new set of plugs.

Any practical advice written here will inevitably lead to a curse against the author over time. For nothing. Let's look at a few examples of the failure of engineering in cheap rubber fatties (up to 10,000 rubles) that took place.

Stark Impress Strong (leftovers are sold for about 5000 rubles) Outwardly very nice, strong on all sides, although completely plastic, the smartphone has a congenital sore that cannot be cured. The spoken microphone is located so deep and behind such a thick layer of plastic that the interlocutor will never be able to understand what you are saying. Only noise will penetrate into the ear of the interlocutor, he will constantly ask again and ask to use a telephone headset. It's funny, but the only 'fix' for this problem is to make a small hole in the bottom of the case. Of course, the phone is no longer waterproof.

Like the previous one, this smartphone was bought by my friend and the owner was happy for a month. Then it was noticed that thanks to the overlapping of the protective glass directly on the plastic of the front of the smartphone, and its unique shape, the smartphone pulls the hair out of the beard (hair gets stuck in the gap between the glass and the plastic). And a month later, the inevitable happened. When the smartphone screen protrudes beyond the geometry of the front face of the case, it will surely break. Replacing the Ginzzu rs8501 touchscreen in an authorized service costs about 2,500 rubles, it's not too expensive, but the smartphone has already proven that it is completely unusable and is not worth spending money on repairing it.

The smartphone has all the attributes of protection, which includes a case that is screwed on with screws, access to the SIM card tray only with the help of a foreign flat object, stainless steel plates on the sides and around the main camera. 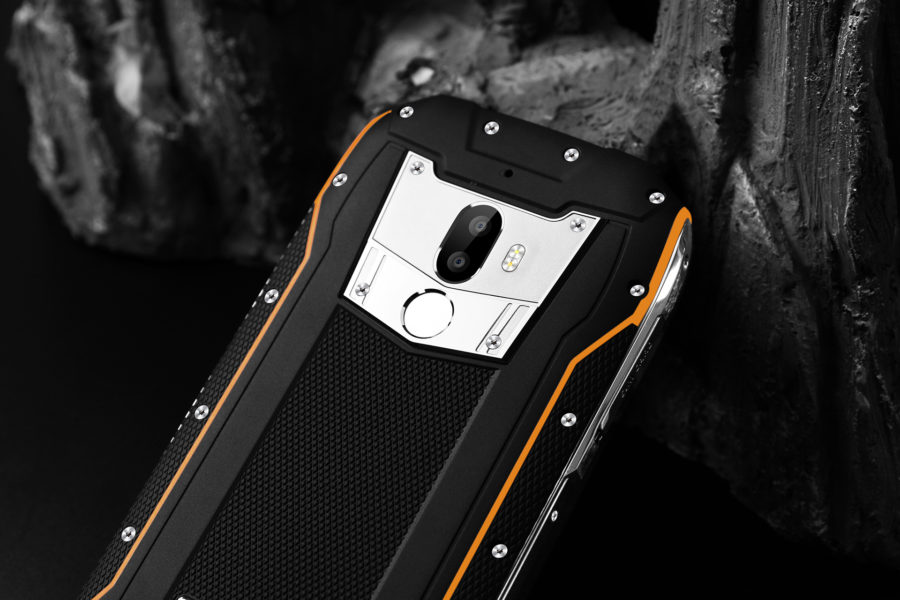 The chipset MediaTek Helio P25 works inside, which is comparable in performance to Snapdragon 625. Everything seems to be fine. Well, not really. The first buyers and testers of the smartphone have already noted the highly distorted sound (microphone and main speaker) and the absence of a 3.5 mm jack for connecting a standard headset. It would seem like little things, but there is something else. Even at idle, the smartphone heats up, and under the slightest load, the heating goes beyond comfort: This is one of the reasons why weak energy efficient chipsets are most appropriate in a rugged smartphone. Alas, in the closed atmosphere inside the smartphone case, a powerful and 'hot' chipset will quickly go into throttling and will not be able to perform its functions. This is especially true in the summer, when a secure smartphone is most in demand as a means of communication and navigation during a hike. In a hot summer, even a 'ventilated' powerful smartphone sometimes turns off when trying to shoot something on the camera, but here it will surely happen.

Despite the fact that protected budget smartphones of the Xcover series from Samsung are not officially supplied in the Russian Federation, you can read a lot of warm words about them on the specialized forums. Users love the level of protection, design, mechanical buttons, and stable performance in harsh environments. Among the shortcomings, they note the mediocre touchscreen sensitivity and the need to stick a protective film on the rear camera (scratches). If you are the owner of a Samsung Xcover smartphone, please tell us about your experience, is the smartphone worth your money?

All smartphones costing up to 10,000 rubles have all at once or one of the disadvantages described above. The manufacturer spares money even to make the back cover screws from more or less durable metal. There is a strong suspicion that in most cases they are made of a soft zinc alloy. So is there really no way out? Of course there is a way out. For the same 10,000 rubles, it is quite possible to keep within the kit: An ordinary waterproof smartphone (or restored to the state 'like a new' flagship) and an armored case for it. It is possible that in order to implement this plan, you will have to wait for the delivery of goods from China and this will not suit everyone. However, such a rugged smartphone will bring immeasurably more joy to its owner than 'kind of' rugged smartphones from B-brands. Please express your thoughts on this topic.