Moto ShatterShield technology – how and why?

The proprietary ShatterShield technology, developed in 2015 by the Moto company, became interesting, but, as it seems to me, was undeservedly forgotten too quickly. The thing is that numbers, parameters and things that can be seen, discerned and immediately felt are in fashion. Eight cores, ten cores, four, six, ten gigabytes of RAM, a curved screen, a concave screen, two cameras, three cameras, five cameras, and so on – that's what attracts attention in the first place. And the new display design, thanks to which when the smartphone falls on the asphalt, concrete or any other surface, the screen remains intact and unharmed, is not very interesting, because it will work for a few, some 'wow' parameters cannot be squeezed out of it, but you can show it perhaps in the form of a video, and even then a couple of times. That is, constantly squeezing the 'profit' out of it will not work. The second point is expensive, difficult to explain to the end user and, again, not relevant for everyone. How often have you dropped your smartphone to the broken glass on top of the screen? Never? Once? It is easier for a company like Samsung to introduce some kind of additional warranty program in some countries, such as 'pay a couple of thousand and get the right to replace the screen damaged by a fall on your device for free', which they do. However, I still think ShatterShield is incredibly cool and should, definitely be used in the future!

Imagine the construction of a typical screen in a typical smartphone. In a very simplified way, it looks like this: there is a chassis, this is the inside of the smartphone, a kind of frame, it can be made of plastic, aluminum, steel or some other material (in fact, no), on top of it there is a sensor layer and above it is a protective glass panel covered with a resistive material to transmit touch information further. Previously, there was an air gap between the display, the sensor layer and the glass, but now it is not in the devices. The presence of the interlayer did not have a good effect on the quality of the picture, it was slightly distorted, but in some cases it helped to avoid changing the entire display module if the glass was damaged. That is, if the smartphone fell to the floor, the glass could break, but the screen itself could not. Now all smartphones are equipped with displays without an air gap, and if the screen falls on the asphalt unsuccessfully, it will most likely have to change the entire structure 'screen, sensor, glass'. The ShatterShield display is built on a different principle. It is also based on a chassis (aluminum in the case of the Moto X Force), which houses a flexible OLED screen. In fact, Samsung's Super AMOLED displays also have some flexibility, after all, the company has successfully used this property of screens in the Edge line of smartphones, but most of the panels themselves are not flexible. The ShatterSheild screen uses a flexible matrix that is connected to other smartphone electronics using a Shock Resistant Electrical Interconnect. Then comes a special impact-resistant sensor layer, and on top of it is a protective coating made of impact-resistant plastic (ShatterShield Lens). And finally, the final layer of this 'sandwich' is a thick protective film, also installed at the factory. 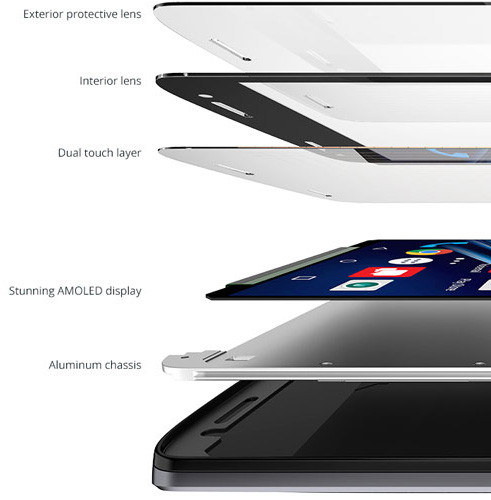 There are a few important points to be aware of here if you decide to buy a smartphone with ShatterShield. Firstly, the technology really works, a smartphone (in my case Moto X Force) can be thrown to the floor from a height of one or two meters, without effort, with a swing, and so on, thrown against a brick wall or hit with a hammer – the screen remains intact . The maximum – scratches will appear on the protective film, but even then, it will be such a situation when the smartphone body itself will hardly survive, that is, very strong blows. Secondly, the final layer of the 'sandwich' is not some magical coating that cannot be replaced with anything when worn. This is a high-quality protective film, it is glued at the factory, but still remains just a film. If necessary, you can peel it off and replace it with another one with better oleophobic properties, for example. Thirdly, and this is important to understand, one of the main components of the reliability of ShatterShield technology, in addition to the flexible OLED screen and a special touch layer, plastic protection together with the glass. No matter how fantastically reliable glass the manufacturer installs in a smartphone, there is a good chance that it will break if dropped. So for ShatterShield, the company chose the only correct option – plastic.

That's what ShatterShield is. In my opinion, this technology has a future and will be applied, but how massively? I do not know. Personally, my smartphones sometimes fall, but they never beat screens (pah-pah-pah), and meanwhile, having a choice between two equivalent devices, one of which uses a simple protective glass, and the other ShatterShield, I would choose the second . Because it is safer.

A week with Moto X Force