Previously, I used inexpensive wired headphones from Sony, but I caught myself thinking that the operation of these begins to annoy, especially in winter, when you are wearing several layers of clothing and the cable is noticeably dubbing in the cold. In addition, I used to go to the gym with an iPod Shuffle and didn't know grief. However, I got so used to Google Play Music on my smartphone that I could not bring myself to download music again and transfer it through iTunes to iPod.

Thus, I decided it was time to finally get to know Bluetooth headsets. The budget was within 3,000 rubles. Headphones are bought for all occasions, including for listening to music and podcasts in the subway, so the form factor is exclusively 'plugs', tk. have good passive noise insulation. The choice fell on Meizu EP-52. I have been using them for more than two months now, and I would like to share my operating experience.

Meizu go to great lengths to create a positive first impression of their devices when unboxing. The headset is packaged in the form of a book. Made of high quality cardboard with no less high quality printing. Even before you start using the product, you get the impression of a high-quality, solid thing. It's not a shame to give. In this regard Meizu great fellows. When you hold such a package in your hands, the thought that this is an unknown 'basement' China does not arise. And considering the price of the headphones, the approach to the little things is pleasantly surprising. 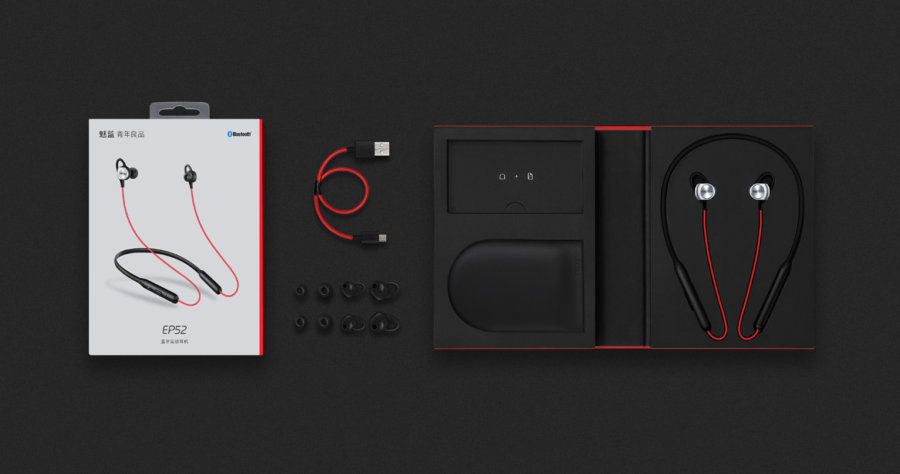 However, when you open the package, an unpleasant chemical smell hits your nose, which is difficult to describe (looking ahead, I will say that the headphones themselves do not exude any unpleasant odors). So, before us are the headphones themselves, a rubber case, an envelope with replaceable nozzles and waste paper. Includes 3 ear caps and ear sizes for a more secure fit in your ear. We were pleasantly surprised by the presence of a cover in the kit.

The headset is made in the collar format. Bluetooth module, 'brains', battery, microphone and control buttons are located on the bow that rests on the neck. The solution, in my opinion, is a good one. The main weight is on the neck, and the headphones themselves are light and compact. It is for this reason that I did not consider Meizu EP-51, because the headphones themselves are quite massive and in winter it is not so comfortable to use under the hat. The collar itself is made of silicone, pleasant to the touch. The weight of the entire structure is small, you quickly stop noticing the presence of a foreign body on your neck.

The headset is made of high-quality materials, perfectly assembled: nothing backlash or creaks. In my version, the headset is in black and red. There is also a gray version on sale. It goes well with sports and casual clothes, but looks pretty silly with a shirt. But Meizu and position the headset as a sports headset.

I repeat that the set comes with 3 sizes of earpieces for the headphones themselves and 3 sizes of 'ears'. Alas, the standard earpieces were not suitable for my ear. The headphones constantly had to be corrected, otherwise they did not fit tightly in the ears, the bass disappeared, the noise isolation was broken. And if you actively move your jaw, then the headphones almost immediately fell out of your ears. Thus, even in daily use, the headphones constantly had to be adjusted for acceptable sound; there was no question of using it in the gym. The solution was found quickly – I rearranged the attachments from my old Sony, and everything was fine. The earbuds now fit securely in your ear. How many pairs of 'plugs' headphones have passed through me, but this is the first time I've encountered such a problem. But my ears and Ear / AirPods fall out almost immediately. Let's attribute this to the peculiarity of the structure of my ears. The manufacturer emphasizes that the headset is protected according to the IPX5 standard. You can safely use it in the rain and in the gym – it is also not afraid of sweat. A long press on the center button turns the headset on and off. When the headset is turned on, the central button acts as Play / Pause, and also accepts or hangs up an incoming call. Double-clicking brings up the Google Voice Assistant. A short press on the '+' and '-' buttons adjusts the volume, with a long press the tracks are switched.

There are questions about the controls. Firstly, without habit it is quite difficult to find the right button, but after a couple of days of use, there will be no problems. Secondly, the center button is too tight. It is quite difficult and unpleasant to press with a fingertip, and when pressed with a fingernail, the rubber coating quickly becomes unusable. And in winter, using the buttons is not possible, because they are deep under the scarf.

Next to the buttons there is a LED that signals the switching on / off of the headset. The LED also blinks when interacting with the headset: when adjusting the volume, switching tracks, etc.

When searching Bluetooth – the device LED blinks blue and red. When the connection is established, it blinks once every ~ 5 seconds in a rather bright blue color. What for? Unclear. The owner of the headset still does not see the LED when the headset is on the neck. In a dark environment, annoying, not to mention unnecessary attention from the people around you. You walk late in the evening, and people now and then pay attention to you, because something on your neck is blinking quite bright blue. The LED blinks too brightly. Describing the sound is a thankless task, too subjective factor. Again, I am not an audiophile, so I will express my opinion, compare the sound with the Sennheiser cx-300ii. Headphones are compared on Honor 8, iPad Mini 2.

According to information from the company, EP52 is equipped with Bluetooth – an audio module on the CSR 8645 chip with support for the AptX audio algorithm.

The sound quality is good enough, but highly dependent on the genre of music you prefer to listen to. With rap, electronics, pop and other music with a rather primitive melody, the headphones cope with a bang, there is practically no difference with the Zenhas. Good bass, with no sagging mid and high frequencies, a good headroom. However, more complex music is no longer “exported” by headphones. I completely stopped listening to Pink Floyd. The sound is too flat and does not cause any positive vibrations. There is only a desire to lower the volume, especially when long playing on the guitar, it sounds too cheap. On android, using the equalizer, it still turns out to slightly correct the sound, on iOS this will not work I connected headphones to devices with Qualcomm AptX support – I did not notice the difference.

Voice quality is C grade. From time to time they complain that it is hard to hear. However, I have not yet met a headset to which there would be no complaints from the interlocutors. I believe that the point is the absence of a noise reduction system. Correct if wrong.

The headset is equipped with a module Bluetooth 4.1. The manufacturer promises a reception range of up to 10 meters. Unfortunately, the number of interruptions and distortions is sufficient, especially in winter, when the headset is deep under the down jacket and the phone is in the jeans pocket. According to my observations, the more actively the phone moves in space, the more interruptions and sound distortions. When the mobile phone lies motionless, the sound is really transmitted without any problems up to 10 meters. Hiking is rarely complete without periodic interruptions.

The manufacturer promises up to 8 hours of music listening. The real state of affairs is close to the truth. Headphones in my mode have to be charged once a week. Autonomy can be called good, you have time to forget when you last charged the headset.

The battery status is shown in the notification line on both Android and iOS. The headset is charged for about two hours via the Micro-USB connector.

There is only one gripe: a short interval between the warning about a low battery and the direct switching off of the headset. If the headset reports 'Battery low', it will turn off after 30-40 minutes. I would like the headset to warn at least an hour and a half before turning off so that you can complete your excursion from home without any problems. Despite the shortcomings that appeared during operation, the overall feeling of the product is positive. Irritation is caused only by periodic interruptions during walking, with other shortcomings it turns out to be quite easy to put up with.

In official retail, the headset is estimated at 3,500 rubles. If you buy headphones with delivery from China, then it comes out in the region of 2,300 rubles. In my opinion, the headphones are definitely worth 2,300 rubles, at least for sports and for home use. There is no return to wired desires, too quickly you get used to the lack of a wire and the 'freedom' of a smartphone. In the budget segment, I did not notice the difference in sound between wired and wireless headphones. Why then continue to get tangled up in wires, if within 3,000 rubles you can already afford a good Bluetooth headset?

I hope my operating experience will be useful to someone. Ask your questions in the comments, I will try to answer everything. Thank you.